Thank you for registering for the webinar. 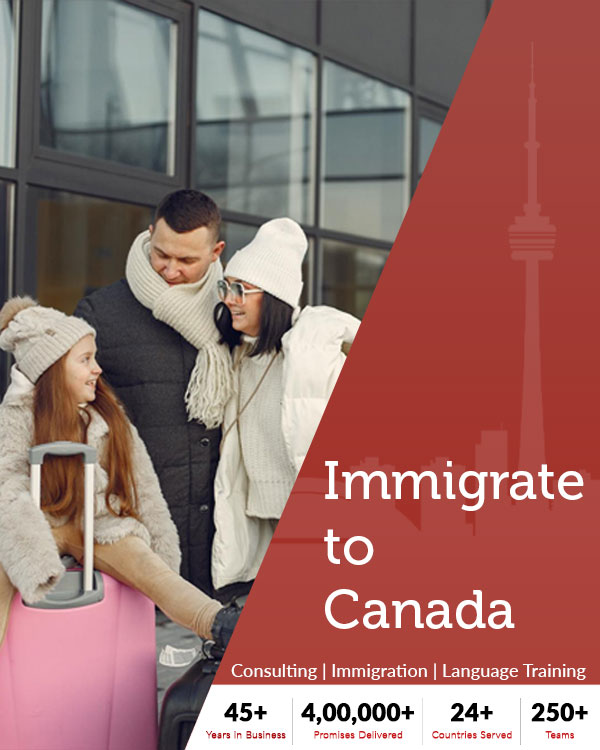 The province of Ontario is where most immigrants from around the world choose to settle in Canada.

Nearly 40% of all Canadians reside in Ontario, the province with the highest population in the country. Toronto, Canada's largest city, and Ottawa, its capital, are both located in Ontario. Ontario is, in many respects, the hub of Canadian politics, society, and the economy. The most popular destination for immigrants to Canada is by far Ontario. One-third of all new arrivals arrive in the province each year. Ontario's job prospects, high income, and diversified population attracted people to settle there. In reality, more than half of Toronto's population is non-Canadian.

Through this program, potential immigrants who possess the qualifications and experience sought after by the province may be granted a provincial nomination by Ontario, following which they can submit an application to Immigration, Refugees and Citizenship Canada for permanent residence in Canada (IRCC).

An overview of the Ontario PNP

In 2007, the Ontario PNP, officially known as the Ontario Immigrant Nominee Program (OINP), was established.

The primary aims of the OINP are to address skill shortages in certain sectors, facilitate investment in Ontario, and encourage the settlement and integration of newcomers.

Initially, the Ontario PNP was only permitted to nominate up to one thousand newcomers. Today, Ontario nominates approximately 8,000 immigrants annually.

Some immigration streams in Ontario are basic, while others are enhanced.

Streams that are aligned with the Express Entry system are enhanced. This is the federal immigration system used by Canada to administer applications for permanent residency through its three primary economic class immigration programs.

An applicant is assigned a score based on the Comprehensive Ranking System through this system (CRS). The candidates with the best scores are then asked to apply for permanent residency.

Those with a nomination through an expanded provincial program receive 600 more points, practically assuring an Invitation to Apply (ITA) for permanent residency. In addition, their nomination is obtained through their Express Entry profile.

Base streams are streams not aligned with Express Entry systems. Those who receive a province nomination must submit an application directly to Immigration, Refugees and Citizenship Canada (IRCC).

If you desire to immigrate to Ontario, you can choose between three categories:

The Human Capital Category includes skilled workers, skilled French speakers, and tradespeople. It is also for international graduates with a Master's or doctorate from an Ontario university. There is no requirement for a job offer to apply under this category.

The Employer Job Offer Category is for candidates who have been offered an eligible job in Ontario by an employer who is prepared to nominate them.

Two sub-streams make up the Human Capital Category itself. Ontario Express Entry is one of them. This sub stream programs are enhanced. They are therefore connected to the Express Entry program.

The following initiatives belong to the category of human capital:

The Federal Skilled Worker Program (FSWP) and the Canadian Experience Class fall under this category (CEC).

For anyone with appropriate Ontario work experience in a qualifying trade occupation.

The following initiatives do not align with Express Entry. A candidate must register an expression of interest (EOI) and build a profile:

Graduates with a Master’s degree from an Ontario university may apply to this stream.

Graduates with a PhD from an Ontario university are eligible to apply as well.

Please schedule a FREE visa assessment with us to determine your eligibility to apply for Canadian immigration. We at Dynamic Group offer the best solution for your Immigration related queries.

You can now sponsor your family as well for Canadian PR. However, you are mandated to pay the following fees-

You have the privilege of sponsoring your parents and grandparents under the family sponsorship program. If you want to sponsor your parent or grandparent, you will have to pay the following fees-

What are the Fees in addition to the Canada PR Visa Fees?

There are other fees apart from the permanent resident fee that an applicant needs to pay during the process. Below are the following fees that one needs to pay while getting Canadian PR-

ECA report is also a mandatory document you must submit to get Canadian PR from India. There are multiple ECA organizations available in Canada. However, each esteemed ECA organization has a different processing time and fees. The charges depend on the type of organization you choose to process with.

Canada is an English-speaking nation. Therefore, you must have good proficiency in English for communication purposes. You will have to appear for an English proficiency test like IELTS to prove your English is up to recommended parameters. This exam is divided into four major segments; speaking, listening, reading, and writing. You will have to pass each segment to prove your English proficiency. Securing a good band in IELTS increases your overall CRS score as well.

Applicants are required to pay the biometric fee during their application submission. Also, the biometric for CAD 85 (INR 5173) per person. In case you are immigrating to Canada with your family, you can opt for a family plan that will cost you CAD 170 (INR 10347).

Applicants are required to pay the biometric fee during their application submission. Also, the biometric for CAD 85 (INR 5173) per person. In case you are immigrating to Canada with your family, you can opt for a family plan that will cost you CAD 170 (INR 10347).

Applicants are obliged to submit the police clearance certificate as the required document for Canada PR from India. This certificate justifies that you don’t have any criminal background. Besides, if you are accompanying your spouse or any dependents, you must also submit their PCC. You can get the PCC from the police station of your location. In case if you have ever been convicted, you will have to explain the reason.

In addition to Canada PR visa fees, applicants will have to undergo medical tests. You must be mentally and physically active in your reports. Once you have the report that proves you are a healthy person, compile it with other required documents. Also, there are several panel physicians by the IRCC; you can acquire a medical certificate from them.

The proof of funds ensures that the applicant can sustain all the living costs and other expenditures. Your application may go on hold if you don’t compile the proof of funds with the required documents for Canada PR.

How can Dynamic Group Help You?

The dynamic Group has been serving in Global Mobility for the last 47 years. In these last 47 years, we have helped over 4,00,000 clients in accomplishing their foreign resettlement dream.

“In these last 47 years, we have gained the trust and faith of thousands of applicants by offering incredible and transparent service.”

We Dynamic Group stands out as one of the reliable, authentic, and credible immigration consultants. In other words, our actions speak way louder than our words. In this journey of assisting clients throughout the process of Canadian Immigration, integrity and top-notch service remains our foremost goal.

We have a team of professional Immigration Consultants with years of experience in the same industry. We provide transparent assistance to the client throughout the process. Also, our professionals find the right immigration pathway that aligns with your profile. We scrutinize each applicant's profile carefully and mindfully to mitigate application rejection chances.

Let Dynamic Group help you to make this transition process an incredible experience. It’s our pride and goal to deliver more than expected. Start a new journey of success by immigrating to Canada.

Get in touch
Ready to get started?

Great organization require great talent. Tell us about your recruitment issues and allow us to help.